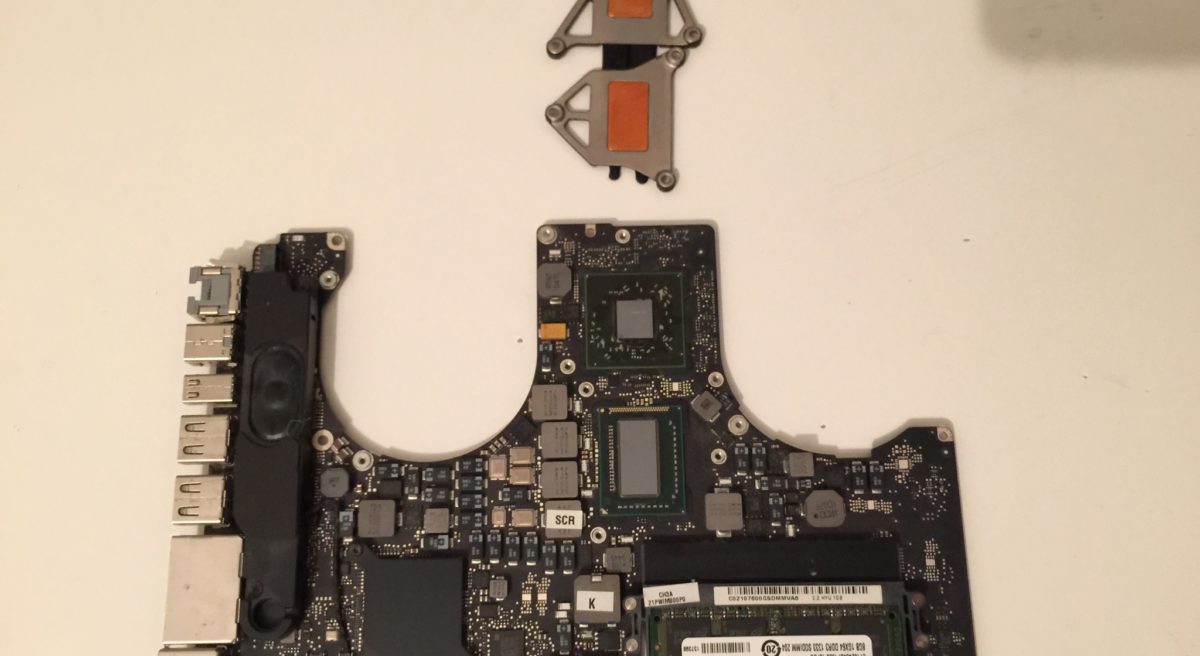 Update : The problem has returned, but gave me 10 days of trouble-free operation. Time to take it to Apple and request that they cover the cost of the repair under the UK Sales of Goods Act. It’s quite clearly a manufacturing defect so legally should be covered.

Update : Apple have agreed to repair the laptop under an extended warranty. The Genius initially refused, stating there is no repair program and it is not an official manufacturing defect. I escalated the issue to a manager and was told they would cover the repair (which would’ve been £420).

I’d like to think that I treat all my clients’ hardware repairs as though they were my own, showing them the same care and attention as I would with equipment I had invested in myself.

On this occasion, the patient in question actually was my own laptop, a 2011 MacBook Pro 15″. Over the past few weeks the graphics card has begun to fail, with orange stripes appearing over the screen and the laptop freezing then refusing to reboot.

The problem had been intermittent until this evening when it became a permanent thorn in my side.

Following on from several recent successful repairs of iPhone 4Ss with the notorious ‘Wifi disabled’ fault, and considering my AppleCare had run out on the laptop, I thought I’d give reflowing the graphics card a try.

I removed the logic board and processor heatsink, cleaning all the dried thermal paste off with an alcohol wipe. I then isolated the graphics chip with heat-resistant Kapton tape, then heated it to 280C for 5 mins, cooling to 250C for a further 5 mins.

After letting the logic board cool for a few minutes, I reapplied Arctic thermal paste and reassembled the laptop. I reset the PRAM (alt + cmd + P + R) on the first boot and the MacBook Pro (on which I’m writing this post) booted straight away with no visual glitches. It’s been running for the last 2 hours with no issues and seems noticeably cooler.

It may not be a permanent fix but it seems promising so far. I’ll update the post after a few weeks of hopefully no glitches.